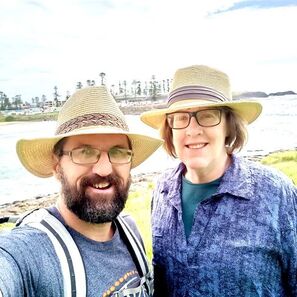 Our Lead Pastors background
Pastor Pete is a passionate follower of Jesus who has served God in a variety of fulltime, part-time and volunteer leadership roles over the last 40 years.
He is also a passionate runner having run over 60 marathons and his longest run was a 2405km epic run from Cape Reinga to Bluff in New Zealand. That story is told in a video found here.
Pete's first leadership role was a youth leader and speaker in his local Catholic church in Hokitika, New Zealand in the mid 80's.
After a short stint in the construction industry Pete came to Wollongong to train as a Pastor under Barry McMurtrie (our founding Pastor) at the Institute for Contemporary Church Leadership.
While training Pete got to know a fellow student Linda, and they were married in 1990.
Linda and Pete moved back to New Zealand in 1990 and spent 10 years in Christchurch. They began with Bishopdale Church of Christ and then being sent out by Bishopdale to plant a new congregation. Following those ministries Peter spend some time lecturing for Integrity Bible College in Church History, Preaching and Church Growth.
Returning to Australia in 2000 Pete moved into a Facilities Management role with Bondi Junction Uniting Church and led the evening congregation in a volunteer capacity. In 2005 Peter was invited to lead the church as the Senior Pastor which he did leading the church in a period of growth.
In 2009 Pete moved into working in the area of Homelessness and worked with the Salvation Army to train Welfare Workers across the state until 2014. He then took on the role of Manager of Telopea Family Services and worked as a part-time Pastor at Telopea Church of Christ until 2018.
Pete then decided to start his own business and has worked in education and training across Australia while at the same time supporting a number of churches with his preaching and leadership skills.
During this time Peter has continued his studies and has a wide variety of qualifications such as a Masters of Management, Batchelor's in Business and Theology, and a variety of Diplomas in Counselling, Community Services and Education.
​Peter and Linda have three adult daughters and five grandchildren.
Newsletter
If you would like to learn more about what is happening on a week to week basis you can sign up for our weekly church newsletter by sending an email to:
Email for newsletter: ​infonorthernbeachescofc@yahoo.com
Book a Pastoral Visit
You can book a pastoral visit with Pastor Pete by clicking on the following link. If you are unsure how to use the online calendar there is a short 1 minute explanation video below.
Click here to make a online Pastoral visit appointment.
Contacts
Phone Peter 0407278175
Email Lead Pastor: Peter Watson - peter.watson@impactfacilitation.com.au
Email Church Secretary: John Piper - john@piperpiper.com.au
Email Board Chair: Brian Healy - brianhealy44@gmail.com
Email Webmaster: ​cir2804@bigpond.net.au
You can also contact us using the form below.
Giving Information
If you would like to contribute to the Church and it's mission activity by direct bank payment use the following details:
Bank Account Name: Northern Beaches Church of Christ
BSB: 112 - 879
Account number: 477 353 233
You can either include your name, or write Anon, if you prefer.